Translation as a Touchstone

Translation as a Touchstone focuses on translation as a creative process, where Narasimhan proposes that translation is an art of highlighting the complex relationship that arises between two languages, their cultures and sensibilities when they are positioned as a main language and a target language. The implications of this proposition are far-reaching, as Narasimhan argues in this book. The place of English in translation exercises in India is an implicit theme, where translation is an act which consolidates the terrain between two linguo-cultures. English, as argued, is a touchstone language, and in a multi-cultural country like India, this hold of English adds weight to the case for transliteration. With the examples of Vijay Tendulkar’s plays and Arundhati Roy’s The God of Small Things, Narasimhan argues that transliteration not only can but also should extend to wholesale incorporations of Indian language interludes into English translations. Through a comparative study of original passages and phrases in literary texts along with their translated equivalents, she has followed a multi-pronged strategy and has used, as methodology, the comparative analysis method. Though the target language is more than one in two of the works discussed in the essays—Samskara, by U. R. Ananthamurthy, and Chemmeen, by Tagazhi Sivasankara Pillai—Narasimhan incorporates multiple ways of looking at the translations and does not focus on any one language in isolation. 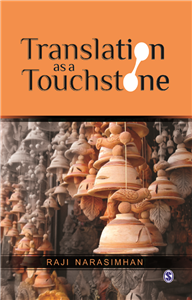