The novel revolves around the heroine Basma, who suffers from a neurological disease. The sedative medications prescribed by her doctor have affected her memory and so she has become confused. She tries to restore her memory and her body, which has been plagued by painful spasms – something difficult for someone like her, a dancer and choreographer.

The novel unfolds inconsistently, telling the story of Basma from childhood on, experiences with her first boyfriend, Ahmad, and her sickness after following the tragic departure of him and her father during the Lebanese civil war. In addition to Basma’s story, we read about the lives of the people she knew and liked throughout her life, including her friend, Anisa, and her emotionally and financially tight husband, and how writing changed her life and helped her fight her disability.

We also read about Amina, who is emotionally hungry, and Nizar who investigated different politics and beliefs, ending up insane. In addition to other characters with stories that run in parallel with the main character, Basma, whose life centres on her relationship with her lover and husband, Youssef. A creative painter, his shifts towards fundamentalism lead her to separate from him as she is passionate about life, love and dancing.

The novel accurately describes the similarities between her sick body and that of Arab cities collapsed due to the sectarian wars that took place after the so-called ‘Arab Spring’. The heroine documents her sickness to a virtual friend, describing what made her sick and how she resists her illness with will and determination. Her narrative expresses her rejection of religious, sectarian and terrorist extremism of all sects and religions, especially those that diverged from the true Islamic religion and its compassionate teachings.

In this novel we find poignant human details and a graceful narration full of expressions that make the reader anxious to know more about the destinies of all its characters. Between the memory of a past saturated with loss and love, and a crueler present witnessed in collapsing cities, Basma clings to her body that keeps on betraying her.

Who said that our lives and our bodies are different from the stories of our cities? Who among us knows if our most recent dance was the farewell dance, or a new beginning? 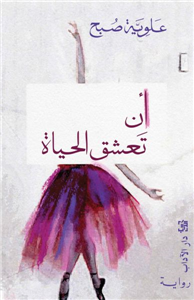 Shortlisted for the 2021 Sheikh Zayed Book Award for Literature

Alawiya Sobh is a Lebanese writer and novelist. Her novels have been translated into many languages including French, German, Italian and English. Her translated books have been published by major international publishing houses such as Gallimard in France, Suhrkamp in Germany, Mondadori in Italy, and Seagull in the USA. All her novels are issued by the Lebanese publishing house Dar Al-Adab.