Those Who Did Not Die

Impact of the Agrarian Crisis on Women in Punjab

Even as they produce food for society and its people, lives dependent on agriculture are barely able to make ends meet. The cost of food production far outweighs the returns; the peasantry is falling prey to indebtedness, both institutionalized and non- institutionalized. It is facing the severest of challenges, with even dalit landless labourers becoming victims of indebtedness and succumbing to suicide, Based on a study done in eight districts of the Malwa region of the Punjab, this book uses quantitative data along with field work, narratives and interviews with peasant unions. Over136 families have been interviewed where women as wives and mothers of the deceased speak of the aftermath of the suicide. The book outlines the distress borne by the family, including women, the children and the elderly in the aftermath of peasant suicides. By doing so, it interrogates the split between public and private; production and social reproduction; work and family. It highlights the determining character of capitalist-intensive agriculture in today's crisis times by focusing on women's reality and renewed hardships in a caste, class and patriarchal society. 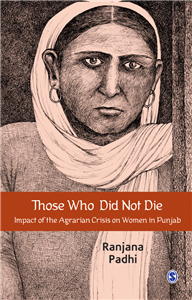