The Strange Case of Deconstruction in America

This book examines the affinity between “theory” and “deconstruction” that developed in the American academy in the 1970s by way of the “Yale Critics”: Harold Bloom, Paul de Man, Geoffrey Hartman, and J. Hillis Miller, sometimes joined by the French philosopher Jacques Derrida. With this semi-fictional collective, theory became a media event, first in the academy and then in the wider print media, in and through its phantasmatic link with deconstruction and with “Yale.” The important role played by aesthetic humanism in American pedagogical discourse provides a context for understanding theory as an aesthetic scandal, and an examination of the ways in which de Man’s work challenges aesthetic pieties helps us understand why, by the 1980s, he above all had come to personify “theory.” Combining a broad account of the “Yale Critics” phenomenon with a series of careful re-examinations of the event of theory, Redfield traces the threat posed by language’s unreliability and inhumanity in chapters on lyric, on Hartman’s representation of the Wordsworthian imagination, on Bloom’s early theory of influence in the 1970s together with his later media reinvention as the genius of the Western Canon, and on John Guillory’s influential attempt to interpret de Manian theory as a symptom of literature’s increasing marginality. A final chapter examines Mark Tansey’s paintings Derrida Queries de Man and Constructing the Grand Canyon, works that offer subtle, complex reflections on the peculiar event of theory-as-deconstruction in America. 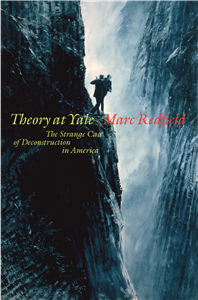 “This is the most informative and accurate book I have read, or ever expect to read, on the ‘Yale Critics’ phenomenon. It’s completely free of both the bad faith and the idolatry that plague any and all other accounts.”—Paul Fry, Yale University “Was the Yale School a media creation? Marc Redfield here offers us both a shrewd account of the quite different contributions of Geoffrey Hartman, Harold Bloom, and Paul de Man to literary studies, and a smart, subtle analysis of the myth of the ‘Yale School’ and its fortunes in the culture wars. An invigorating retrospective on an important chapter in American intellectual history that is not yet over.”—Jonathan Culler, Cornell University