Sussex and England superstar Maurice Tate's story is one of triumph and fame, controversy and tragedy. In the 1920s and 1930s, the all-rounder was the world's most popular cricketer, famed for his brilliant bowling and broad smile - unlike his infamous cricketing father, whose costly error he more than repaid. In his day, Tate's enormous feet were the subject of a music-hall song, his extra pace considered 'magical'; he's now recognised as the first proper 'seam' bowler. He took almost 2800 first-class wickets and thrilled crowds with rapid-fire sixes and centuries. But along the way he suffered a nervous breakdown at the Bodyline series, and threw beer over Douglas Jardine. After a bitter sacking by Sussex, he became a pub landlord and died in poverty. Recently voted Sussex's greatest ever player, Tate doesn't figure in any more widespread Hall of Fame. It's time to remember this forgotten great of England cricket. 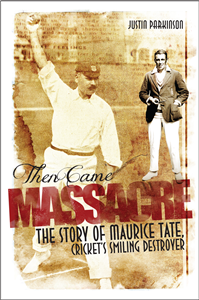 Justin Parkinson is a political reporter for the BBC, covering developments at Westminster for radio and online. A lifelong Sussex cricket fan, he studied history at Cambridge before becoming a reporter and cricket columnist on the Brighton Evening Argus. A genuinely awful leg-spinner, Justin's finest cricketing moment came bowling in the nets to Dean Jones.