Book One of a Trilogy

In 1777, General George Washington experienced a divine visitation at Valley Forge. “Three great perils will come upon this nation.” An angelic being describes the Revolutionary War and the Civil War, but warns, “The Third Peril will be the worst.”

Today, this message is revisited.  Five-year-old Connor Hays, son of the Chief Economic Advisor to the President of the United States, insists that an angel told him, “War is coming to America!”

But who will believe a child?

The Third Peril is a modern-day, epic-suspense novel that builds on General George Washington’s divine vision. Frighteningly relevant today, this is a story about people, faith, and providence in times of cultural upheaval and national insecurity.

This is the first book of a thought-provoking trilogy that will inspire all who are thirsty in a dry and weary land. 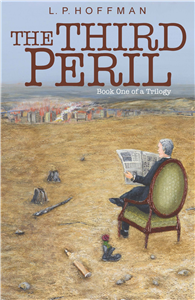 Author, L. P. Hoffman, is a Wyoming native whose imagination was primed at an early age—from her grandfather’s tales about Buffalo Bill to the mystique of Western lore. In her transient childhood, she witnessed the dark side of Caribbean culture and survived war in the Middle East. As an adult, the author has traveled the world and moved among Washington insiders. L. P. Hoffman values unique perspectives and believes that culturally relevant stories born of life experiences are the ones best told.