The Task of the Critic

Today's critic must be something of a philosopher as well as a poet. Yet her work remains above all that of the close reader, and the emergence of the values embodied by the close reader to stand alongside those of the philosopher and the poet may be one of the most significant intellectual developments to emerge in the post-World War II years. This book analyzes the language poets, Deleuze and Guattari, and above all Benjamin and Derrida, to trace the various dimensions of the task of the critic. It concludes with a major chapter on the significance of Derrida's recent work for the conceptualization of religion, and with an Afterword examining the role of the Romantic discourse of the fragment in the archeology of all these discursive strands. The task of the critic, now invited to pass through the discourses of philosophy, poetry, and religion beyond that of close reading, has never been harder - nor have we ever been more in need of it. 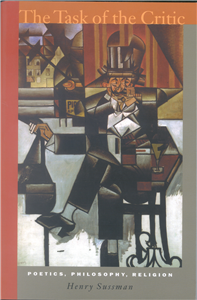