The Supreme Court and Military Justice

This book addresses the body of statutory and case law covering both the military and military conduct. Four chapters discuss the relationship between the Supreme Court and military justice, covering the Civil War era, World War II, the post-war period from 1956 to 1987, and developments since the September 11, 2001, attacks. Each chapter also includes a set of documents that shed light on these periods of U.S. history. Excerpts from key Supreme Court briefs and rulings are complemented by articles from the Army Times, the Armed Forces Journal, and mass media including the New York Times and The Nation. Incisive introductions to these documents explain the evolution of constitutional law and the ways in which federal and state statutes have lessened the effectiveness of both civilian control over the military and civilian judicial oversight. 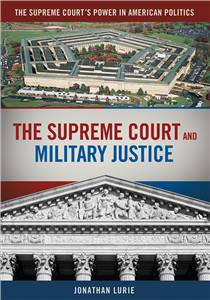