The State of the States

In this era of renewed federalism, state governments take center stage advancing ambitious legislative agendas, pioneering innovative public policy, and providing much needed political leadership. The &BAD:ldquo;devolution revolution&BAD:rdquo; of the 1990s transferred many of the nation&BAD:rsquo;s principal domestic programs from federal to state management, often without transferring the necessary funding. This combination of expanded responsibilities and deficient resources has left many states in financial turmoil&BAD:mdash;unable to fulfill policy promises. At the same time, escalating concerns over national security have prompted the federal government to reclaim more authority.The State of the States captures both the tensions and opportunities at the forefront of state politics. This fully up-to-date fourth edition assembles the preeminent voices on the most important topics facing state governments today.Important new coverage includes:the debilitating challenges governors face in an era of ballooning gubernatorial stature and performance expectations, reflected in the removal of Gov. Gray Davis (D-CA) and the departures of Gov. John Rowland (R-CT) and Gov. Jim McGreevey (D-NJ).the adoption of legislative term limits by referenda&BAD:mdash;illustrating the unmerited public distrust of the legislature&BAD:mdash;and the consequent movement of legislators to other public offices.the reputation of state courts for &BAD:ldquo;liberal activism,&BAD:rdquo; with controversial verdicts on such issues as abortion and same-sex marriage, as well as decisions in favor of tort reform and the rights of criminal defendants. the growing emphasis on performance measures as an accountability tool for state agencies. the rigorous standards and uniformity of the federal No Child Left Behind Act for which states are paying the price. the development of Temporary Assistance for Needy Families (TANF), which devolved authority for welfare programs back to the states after nearly six decades of federal control. the continuous debate over health policy, including the decades-long struggle to remedy health insurance coverage gaps and the more recent push to promote embryonic stem cell research. 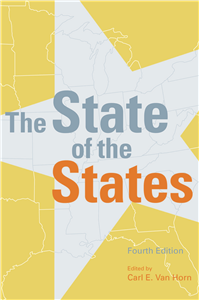