The Soldier and the State in India

Nuclear Weapons, Counterinsurgency, and the Transformation of Indian Civil-Military Relations

The Soldier and the State in India is one of the first attempts at offering a theoretical perspective for examining some of the most critical issues that have emerged in Indian civil-military relations. It specifically examines issues pertaining to military expertise and military professionalism that emerged whenever there was a contestation in civil-military functions, thereby allowing the military greater influence in policy-making. The book uses Samuel Huntington's ideas on military professionalism and Peter Feaver's discussion of military expertise in the American context as the theoretical framework for addressing similar issues that have emerged in debates on Indian civil-military relations. Moreover, it also includes a serious focus on the role of the Indian military in counterinsurgency operations and the impact of Indian nuclear strategy on the relationship between civilians and the military in India. Most books on the subject have failed to address issues that emerge when there is a contestation in civil-military functions; this book seeks to fill that gap. 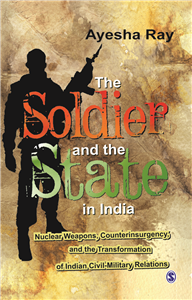