The Sociology of Religion

A Substantive and Transdisciplinary Approach

Most Sociology of Religion texts are decidedly staid and uninteresting, covering "contemporary" developments which are contemporary only if viewed from a disciplinary perspective. They are not contemporary if viewed from the perspective of the religion's practioners (in religious and non-religious settings) and students. The textbooks that attempt to be interesting to undergraduate students often fall short because they either try to cover too much in an encyclopedic format, or sacrifice a sociological perspective for a personal one. Many use real-life examples only superficially to illustrate concepts.

Lundskow's approach is the opposite-students will learn the facts of religion in its great diversity, all the most interesting and compelling beliefs and practices, and then learn relevant concepts that can be used to explain empirical observations. The book thus follows the logic of actual research-investigate and then analyze-rather than approaching concepts with no real bearing on how religion is experienced in society. This approach, using provocative examples and with an eye toward the historical and theoretical, not to mention global experience of religion, will make this book a success in the classroom.

The author envisions a substantive approach that examines religion as it actually exists in all its forms, including belief, ritual, daily living, identity, institutions, social movements, social control, and social change. Within these broad categories, the book will devote particular chapters to important historical moments and movements, leaders, and various individual religions that have shaped the contemporary form and effect of religion in the world today. 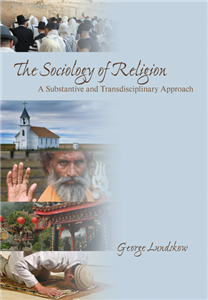