The Rose Man of Sing Sing

A True Tale of Life, Murder, and Redemption in the Age of Yellow Journalism

Notorious city editor-tyrant of Pulitzer's "New York Evening World", Charles E Chapin was the greatest newspaperman of his day. In 1918, at the pinnacle of fame, Chapin, sunk in depression, took not his own life, but shot and killed his beloved wife. After his trial - and one hell of a story for the World's competitors - he was sentenced to life in Sing Sing Prison. Set in the most thrilling epoch of American journalism, this story tracks Chapin's rise from legendary street reporter to celebrity powerbroker in media-mad New York, a human tragedy played out in sensational stories of tabloids and broadsheets. The first portrait of a founding figure of modern American journalism and a vibrant chronicle of scoops and scandals, "The Rose Man of Sing Sing" is also a hidden history of New York at its most colorful. 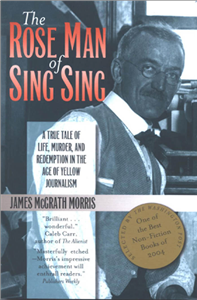