The Question of German Guilt

The New Media and the Markle Foundation

In the years after the Nazi government fell, a philosophy professor at Hindenberg University lectured on a subject which burned the consciousness and conscience of thinking Germans. "Are the German people guilty?". These lectures by Karl Jaspers, a European philosopher, attracted wide attention among German intellectuals and students; they seemed to offer a path to sanity and morality in a disordered world.;Jaspers, a life-long liberal, has attempted in this book to discuss rationally a problem that has thus far evoked only heat and fury. Neither an evasive apology nor a wholesome condemnation, this book distinguishes between types of guilt and degrees of responsibility. He lists four categories of guilt: criminal guilt (the commitment of overt acts), political guilt (the degree of political acquiescence in the Nazi regime), moral guilt (a matter of private judgement among one's friends), and metaphysical guilt (a universally shared responsibility of those who chose to remain alive rather than die in protest againt Nazi atrocities).;Born in 1883, Karl Jaspers took his degree in medicine but soon became interested in psychiatry. He is the author of a standard work of psychopathology, as well as special studies on Strindberg, Van Gogh and Nietszche. After World War I he became Professor of Philosophy at Heidelberg wher he achieved fame as a brilliant teacher and an early exponent of existentialism. He was among the first to acquaint German readers with the works of Kierkegaard.;Jaspers had to resign from his post in 1935. From the total isolation into which the Hitler regime forced him, Jaspers returned in 1945 to a position of central intellectual leadership of the younger liberal elements of Germany. In his first lecture in 1945, he forcefuly reminded his audience of the fate of the German Jews. Jaspers' unblemished record as an anti-Nazi has made him a rallying point centre for those of his countrymen who wish to reconstruct a free and democratic Germany. 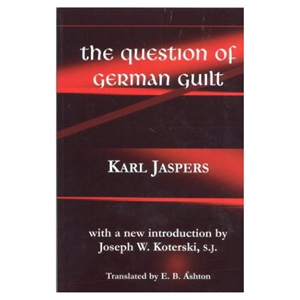 Canada and US English Language held.