The Politics of Autonomy

The book is a critical political inquiry into the idea of autonomy - namely, the efforts of various sections of society to resist the power of the state. It highlights that as movements by women, ethnic groups and other sections rise to prominence, the politics of the future will be a politics of autonomies: a political engagement that combines notions like the devolution of power, the rights of minorities and legal pluralism, and where different autonomies must learn to negotiate and co-exist.

While viewing democratic theory through the lens of autonomy, the contributors to the volume:

- offer a general lesson for post-colonial politics and democratic theory - autonomy has to be an ingredient in the building of democracy, not merely a residual measure to keep some constituencies happy;

- draw attention to the contending principles of autonomy, the consequent politics of autonomies, the inescapable co-existence of autonomies and the need for dialogue;

- plumb the instructive Indian politico-historical experience because of its diversity and range, the extent of colonial innovations, multiple forms of autonomy, the complex path of constitutionalism, a wide variety of accords and the unyielding state that is determined to keep the nation intact. 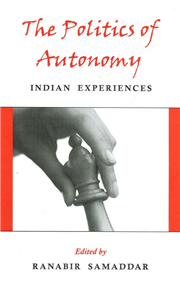