The New Ethics of Journalism

Principles for the 21st Century

by McBride, Kelly B.; Rosenstiel, Thomas B.;

Featuring a new code of ethics for journalists and essays by 14 journalism thought leaders and practitioners, The New Ethics of Journalism: Principles for the 21st Century, by Kelly McBride and Tom Rosenstiel, examines the new pressures brought to bear on journalism by technology and changing audience habits. It offers a new framework for making critical moral choices, as well as case studies that reinforce the concepts and principles rising to prominence in 21st century communication. The book addresses the unique problems facing journalism today, including how we arrive at truth in an era of abundant and unverified information; the evolution of new business models and partnerships; the presence of journalists on independent social media platforms; the role of diversity; the meaning of stories; the value of images; and the role of community in the production of journalism. 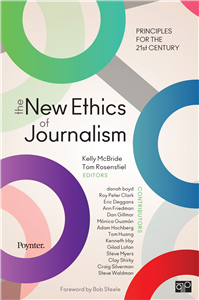