The Mystery of the Glass Ball

Ghassan Al Ghurairi had to accompany his old grandfather to the Leewy Museum in the middle of the desert. They are attending a ceremony honoring his grandfather, who spent his entire life in service of the desert. As they head to their destination onboard an ancient train, Ghassan came across a conspiracy plotted by the criminal Aqrabawi and his bald friend— disguised as two elderly women—to poison the oasis’s water supply. In place of the ecological life in the desert, they want to make way for an international resort and take over the place.

Although Ghassan doesn’t mean to confront this conspiracy alone, he finds himself embroiled face-to-face with the criminals. Fortunately for him, a girl appears at his side to help. Sophia Al-Adnani from Chiparazumpia is also heading with her grandfather and his great eco-friendly invention, the glass ball, to the Leewy Museum, where her grandfather is to be honored.

The two children are able to hold off the criminals initially, but not for long, as Aqrabawi and his friend soon reappear—this time deadest on revenge against the two children. Ghassan and Sophia resist in the face of intimidation and threats, and, using clever intrigue, they manage to disarm the conspirators and escape seconds before the desert guards arrive and arrest the criminals. 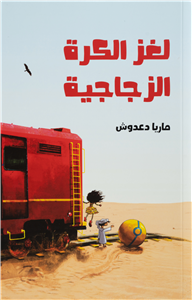 Winner of the 2022 Sheikh Zayed Book Award for Children's Literature.

Maria Daadoush is a children’s author and screenwriter based between the United States and Syria, who has published over 50 books in the Arab world and the USA. She has previously received the Claire Carmichael Scholarship for Fiction, the Katara Prize for Arabic Novels, the Khalifa Award for Educational Creativity, the Shoman Award for Science Fiction, the Arab Publishers’ Forum Prize, the Daybreak Award for Picture Books, and was featured on the Etisalat Prize shortlist. Dadouch’s screenwriting includes the comedy series Maraya and the animation channel Spacetoon. She also worked as editor-in-chief for the children’s magazine Fulla Magazine. She completed her BA in Creative Writing at University of California, Los Angeles in 2016.