The Madmen of Bethlehem

Adopting the story-within-a-story structure of Arabian Nights, author Osama Alaysa weaves together a collection of stories portraying centuries of oppression endured by the Palestinian people.

This remarkable novel eloquently brings together fictional characters alongside real-life historical figures in a complex portrayal of Bethlehem and the Dheisheh Refugee Camp in the West Bank. The common thread connecting each tale is madness, in all its manifestations.

Psychological madness, in the sense of clinical mental illnesses such as schizophrenia, finds expression alongside acts of social and political madness. Together, these accounts of individuals and communities provide a gateway into the histories of the city of Bethlehem and Palestine. They paint a picture of the centuries of political oppression that the Palestinian people have endured, from the days of the Ottoman Empire to the years following the Oslo Accords, and all the way to 2012 (when the novel was written).

The novel is divided into three sections, each containing multiple narratives. The first section, “The Book of a Genesis,” describes the physical spaces and origins of Bethlehem and Dheisheh Refugee Camp. These stories span the 19th and 20th centuries, transitioning smoothly from one tale to another to offer an intricate interpretation of the identity of these places.

The second section, “The Book of the People Without a Book”, follows parallel narratives of the lives of the patients in a psychiatric hospital in Bethlehem, the mad men and women roaming the streets of the city, and those imprisoned by the Israeli authorities. All suffer abuse, but they also reaffirm their humanity through the relationships, romantic and otherwise, that they form.

The third and final section, “An Ephemeral Book,” follows individuals—Palestinian and non-Palestinian—who are afflicted by madness following the Oslo Accords in 1993. These stories give voice to the perspectives of the long-marginalized Palestinian population, narrating the loss of land and the accompanying loss of sanity in the decades of despair and violence that followed the Nakba, the 1948 eviction of some 700,000 Palestinians from their homes.

The novel’s mad characters—politicians, presidents, doctors, intellectuals, ordinary people and, yes, Dheisheh and Bethlehem themselves—burst out of their narrative threads, flowing from one story into the next. Alaysa’s crisp, lucid prose and deft storytelling chart a clear path through the chaos with dark humor and wit. The result is an important contribution to fiction on the Palestinian crisis that approaches the Palestinians, madness, and Palestinian spaces with compassion and depth. 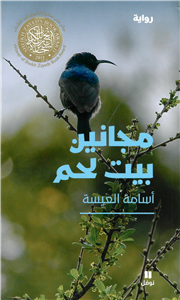 Winner of the 2015 Sheikh Zayed Book Award for Literature

Alaysa is an author and journalist from Bethlehem, Palestine. He has worked for numerous Arab and regional newspapers. He has published three novels, two collections of short stories, and seven research studies on Palestinian history. He was imprisoned a number of times in various Israeli prisons in the periods 1978–1982 and 1989–1991, as well as having been prevented from traveling. Although he sees his personal experience as insignificant in comparison to the suffering of many Palestinians, he nonetheless perceives it as having a profound impact upon his life, and this he reflects in many of his short stories and novels.”