Winter and her friends come to the aid of the Golden Mermaids, which are in grave danger. In the process they go through one adventure after the other. They discover a new watery world, set out to consult with the legendary Loch Ness monster, and convince three dragons to help them in their journey. Winter helps Thomas take care of a new batch of pink babies, meets several spoiled feather-cats, tastes the disgusting taste of the Oxibush leaves, and parties at Amaryllis’ bubble party.

In between, Winter gets to better know her parents, re-examines her relationship with her boyfriend, Timothy, and gets closer to her old time friend Eduard.

This is the sixth installment in the Winter Blue, Fairy-Child book series.

The Winter Blue, Fairy-Child series (7 books and a magical cookbook) oscillates between imagination and reality, between the life of a teenage girl with all its day to day complexities and a rich adventure story which takes place primarily in MagicLand. MagicLand is a secret world run by the fairies, where all magical creatures took refuge after having fled from the human world. The plots are threaded between the two parallel worlds and sweep the reader onto enchanting adventures. 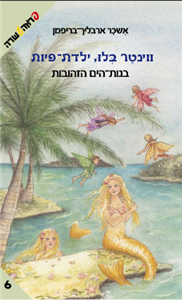 Rights available for all languages besides Hebrew

Eshkar is a renowned Israeli writer that published 28 books (thus far) with some of Israel’s biggest publishing houses, Yedioth Books and Kinneret Zmora-Bitan.

Around 250,000 copies of her books were sold in Israel. Several of her books made it to the bestsellers lists, won gold book awards and were chosen for the Ministry of Education’s school initiatives.

Eshkar is looking to sell rights/license her work for publishing in more countries and languages. Three of her books have been translated into English for evaluation purposes. Eshkar owns all rights to her books (besides the Hebrew language).

Eshkar is a renowned Israeli writer that published 28 books (thus far) with some of Israel’s biggest publishing houses, Yedioth Books and Kinneret Zmora-Bitan.

Eshkar has chosen to review this offer before it proceeds.