The Goetia of Dr Rudd

The Angels & Demons of Liber Malorum Spirituum Seu Goetia Lemegeton Clavicula Salomonis : With a Study of the Techniques of Evocation in the Context of the Angel Magic Tradition of the Seventeenth Century

The Goetia is the most famous grimoire after the Key of Solomon. This volume contains a transcription of a hitherto unpublished manuscript of the Lemegeton which includes four whole grimoires: Liber Malorum Spituum seu Goetia; Theurgia-Goetia; Ars Paulina (Books 1 & 2); Ars Almadel. This was owned by Dr Thomas Rudd, a practising scholar-magician of the early seventeenth century. There are many editions of the Goetia, of which the most definitive is that of Joseph Peterson, but here we are interested in how the Goetia was actually used by practising magicians in the 16th and 17th century, before the knowledge of practical magic faded into obscurity. To evoke the 72 demons listed here without the ability to bind them would be foolhardy indeed. It was well known in times past that invocatio and ligatio, or binding, was a key part of evocation, but in the modern editions of the Goetia this key technique is expressed in just one word 'Shemhamaphorash', and its use is not explained. This volume explains how the 72 angels of the Shem ha-Mephorash are used to bind the spirits, and the correct procedure for safely invoking them using special seals incorporating the necessary controlling angel, whose name is also engraved on the breastplate and Brass Vessel. 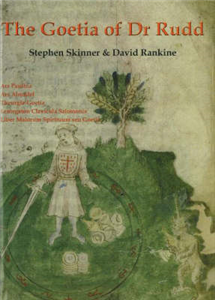