Following the Mutiny of 1857, various factors impelled the British to turn to the province of Punjab in north-western India as the principal recruiting ground for the Indian Army. This book examines the processes by which the politics and political economy of colonial Punjab was militarised by the province`s position as the `sword arm` of the Raj.

The militarisation of the administration in the Punjab was characterised by a conjunction of the military, civil and political authorities. This led to the emergence of a uniquely civil-military regime, a phenomenon that was not replicated anywhere else in British India, indeed in the Empire. Analysing these events, this book:
- Studies the manner in which the Punjab became the main recruiting ground for the Indian Army
- Looks at how certain districts were selected for military recruitment, and the factors motivating the `military classes` among the Punjabis to join the Army
- Discusses the effects of the First World War on the recruitment process in the Punjab
- Highlights the role the civil-military regime played in the politics of the Punjab, its survival after the Second World War and the manner in which it handled the demand for Pakistan and the subsequent partitioning of the province. 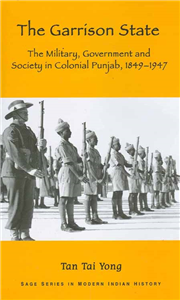