The Future of Finance

In the aftermath of the financial crash of 2008‐9 much has been written about reforming the world financial system. But it is rarely based on an in‐depth analysis of the underlying weaknesses within the system. Nor does it usually tackle the key question of what a financial system is for. This book corrects this state of affairs. It is the result of the work of the Future of Finance Group – British academics, financiers, journalists and officials from the Financial Services Authority, the Bank of England and the Treasury. They met twelve times, for what many of those present described as the best and most searching discussions they had ever participated in. The issues at stake are extraordinarily difficult and profound. The central question is: what is the financial system for? Standard texts list five main functions –but if we study how financial companies really make their money, it is extraordinarily difficult to see how closely this corresponds to the textbooks, and it is also difficult to explain why the rewards are so high and why the system is prone to boom and bust. To answer these questions much of the abstract theory of finance has to be abandoned in favour of a more realistic model of how the different agents actually behave. Central to this is opacity and asymmetric information, combined with short‐term performance‐related pay. While the book acknowledges the benefits brought by the spread of financial innovation and the creation of new, complex financial instruments, the authors on balance come down in favour of a radically simplified and slimmer financial system. They describe the necessary international regulatory and institutional reforms and argue strongly that only a worldwide system of regulation embodied in a worldwide treaty organisation, like the WTO, could have a chance of successfully implementing the necessary changes. 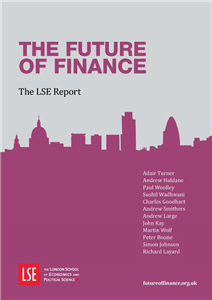 London Publishing Partnership (LPP) is a publishing company, founded in 2010, that specializes in books on economics, business and finance.As well as publishing under our own LPP imprint, we work with researchers, learned societies, research institutes and think-tanks to help them produce and publish their own books. We can provide the following services.Consultancy on editorial, production and marketing strategies for books at the individual-title and whole-programme levels. High-quality and speedy production work (copy-editing, typesetting, proofreading, artwork, indexing, project management). Management of the printing, order fulfilment and distribution of books – or the production and distribution of eBooks and downloads. Tailor-made marketing and publicity campaigns (either for individual publications or for an entire programme).

London Publishing Partnership has chosen to review this offer before it proceeds.