The Further Adventures Of Ociee Nash

In the tradition of Tom Sawyer, Huckleberry Finn, Anne of Green Gables, Pollyanna and Laura Ingalls, the Ociee Nash series is filled with the sweet, funny, poignant and mischievous adventures of ten-year-old Ociee Nash, a likable tomboy who turns her grief over her mother's death into a talent for recognizing lonely people who need a friend. Travel with Ociee as she, Papa, and brother Ben move to the bright lights of Memphis, Tennessee, where a "witch woman" captures Ociee's tender heart. In THE FURTHER ADVENTURES OF OCIEE NASH, eleven-year-old Ociee's life is never plain, quiet or simple. After all, it's the fancy modern world of 1901, big brother Fred is now a married man, and brother Ben just coaxed her to jump off a moving train. Plus, as she's planning to go back to North Carolina for another visit with fun Aunt Mamie, Papa Nash announces that their family is leaving little Abbeville, Mississippi, for the bright city lights of Memphis, Tennessee. Atlanta author Milam McGraw Propst was awarded Georgia Author of the Year and a national Parent's Choice Award for the first book in the Ociee Nash series, 'A Flower Blooms on Charlotte Street, which then became an acclaimed film in 2003 as THE ADVENTURES OF OCIEE NASH, starring Skyler Day, Keith Carradine, and Mare Winningham. Milam's stories are inspired by the history of her own grandmother, Ociee Nash Whitman. 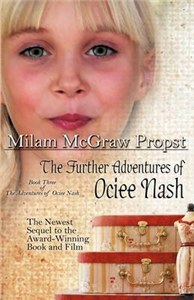