The End of Politics

New Labour and the Folly of Managerialism

New Labour's distinctive idea is that equality and efficiency are partners, not enemies. This, the book argues, is an example of managerialist ideology - the belief that trade-offs between conflicting values can be managed away by clever policies, that management can replace politics.This is not true. New Labour's main economic policies - tax credits, the minimum wage, expanding higher education and promoting macroeconomic stability - have not removed the trade-off between equality and efficiency. However, the failure of managerialism is not merely a failure of particularpolicies. There are deeper flaws in it. It fails to recognize the multiple and conflicting meanings of the ideals of equality and efficiency. And it assumes that governments have knowledge and rationality that are in fact unattainable.The book is a plea to remove managerialism, and replace it with genuine politics. We should ditch the idea that a central elite can manage away social problems, and instead debate about conflicting ideals. 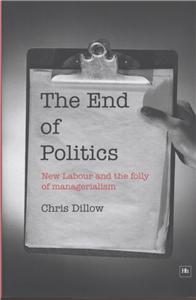