Essential Tips for Buying and Selling On Ebay.co.uk

eBay is a phenomenon! - 50 million users worldwide, and growing rapidly in the UK.;This is the first UK book on eBay. It is a guide to eBay.co.uk, not to the American site. The author is an experienced UK trader who knows the pitfalls and tricks for profitable buying and selling. The book provides everything that tens of thousands of new eBayers need to get started.;From the INTRODUCTION: "1995 was the year that I, like many people, discovered the internet. A friend and I discussed ways to make money out of it. We agreed that online auctions were a really promising area. We even spent some time discussing how you might go about setting them up. It all got a bit complicated and I had books to write, so we never followed through. Pierre Omidyar had the idea and did something about it. eBay, the business he set up in his living room in September 1995, has, at the time of writing, nearly 50 million registered users. You can buy anything from cars to concert tickets, collectable dolls to computers.;I started using eBay for a melancholy reason. In 1999, a friend died suddenly. Don's widow asked me to sell his record collection for her. It included a large number of rarities. I quickly found out what these might be worth, but knew I'd never get anything like their true value from a dealer. So I went to eBay. I'd checked out eBay over the previous few months, but had been too timid to buy or sell anything. Now, however, I had a real reason to begin. To test the water, I auctioned a CD from my own collection: a rare boxed single that the Record Collector price guide said was worth GBP40. I gave it a high starting price of GBP20, the lowest price I would accept. Aweek later, it sold for GBP30. I posted it to France, throwing in free insurance, just in case anything went wrong. Two days later I received my first feedback: 'Very pleasant seller, beautiful item and carefully packed AA++'. More than half of Don's records sold, bringing in prices not too far off the guide price.;I found I had a new hobby, using my unmetered internet connection to endlessly browse eBay when I should have been working on my latest novel. I quickly got a green star alongside my eBay ID. This showed I had more than ten positive feedback comments and no negatives. I sold occasionally, often accepting cash dollars to fund my purchases from the US (this was in the days before Paypal, a money transfer system that's discussed at length in this book). In the last three years I've become a frequent eBay user, buying and selling books, DVDs and comics as well as music items. Last year I got my blue star for 50 plus positive feedback. I've only attended one auction in my life, but I've followed thousands of virtual ones. I've been ripped off, made mistakes and learnt what kinds of auctions to avoid. I still have a 100‰ feedback record, the strongest test of an eBayer (as serious hobbyists call themselves). I still get a thrill those times at the end of an auction when last minute bidders are suddenly outbid and try to get one more bid in before the curtain falls.'.;The book you're reading arose out of a holiday conversation with one of the publishers, an old friend who is a financial whiz but knew very little about eBay. The idea of this book is to give readers the basics of buying and selling on eBay with plenty of tips, practical information and case histories. Equally importantly, it will tell you what to avoid and how to check out suspected cheats - both sellers and buyers, for the internet has given new life to many of the oldest frauds in the book.;This book will also give you the basics of how to run an eBay business, because once you start selling stuff on the net, you're in business, even if it's only in a very small way. Who knows, you might find dealing on eBay much more profitable than you expect. Or you could find it's a great way to track down rare items you didn't know anybody else was interested in. Soon you may find yourself selling spare stuff from the attic to grateful collectors who trust the way you've graded them because they've read your feedback. The possibilities are endless.;You read a lot of negative stuff about trading on the net, but I have to say that the vast majority of eBayers I've 'met' have been great to deal with. I aim to give you the confidence to become one of those eBayers, whatever it is you choose to buy or sell." 'I've only attended one auction in my life, but I've followed thousands of virtual ones.' 'Once you start selling, you're in business, even if only in a very small way.' 'I knew I'd never get their true value from a dealer. So I went to eBay." 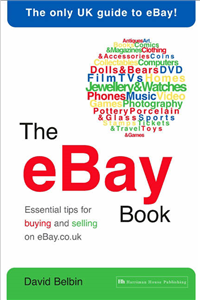