The Distilleries of Campbeltown

The Rise and Fall of the Whisky Capital of the World

Campbeltown was once the whisky capital of the world with 29 distilleries operating simultaneously in 1835. How had this remote fishing port and royal burgh become the epicentre of Scotland's greatest export? David Stirk reveals all in this engaging and well illustrated insight into the people who were the movers and shakers behind this huge industry. The origins lie in illicit distilling which was prevalent all over Kintyre in the late 18th century. Many women were involved in this business which made many ordinary folk very wealthy and out of these origins, the legal trade was established in 1817 with Campbeltown Distillery being the first of many. Over the course of the next two decades every street and corner in the burgh had a distillery or brewery built on it. The names were redolent of Kintyre history and placenames: Kinloch, Caledonian, Dalaruan, Lochhead, Longrow, Meadowburn, Burnside, Kintyre, Rieclachan, Union, Argyll, Glenramskill, Highland, Springbank and Albyn, to name only some. It is no idle boast that Campbeltown was the Victorian whisky capital of the world and just as great schemes rise, so do they fall.;Ultimately the town's prosperity waned with the Great War, the depression, prohibition in the USA and the failure of local coal seams. Now only Springbank, Glen Scotia and Glen Gyle remain in production, solitary reminders of the once great whisky days of this Royal Burgh. 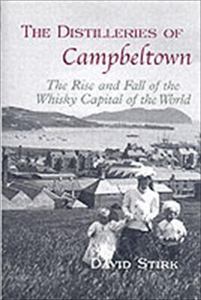