The Discovery of Insulin

2021 will be the 100th anniversary of the discovery of insulin, in a year when the eyes of the world will be on medical researchers. The time is ripe for a look back at this crucial advance in medicine.

The discovery of insulin at the University of Toronto in 1921-22 was one of the most dramatic events in the history of the treatment of disease. Insulin was a wonder-drug with ability to bring patients back from the very brink of death, and it was no surprise that in 1923 the Nobel Prize for Medicine was awarded to its discoverers, the Canadian research team of Banting, Best, Collip, and Macleod.

In this engaging and award-winning account, historian Michael Bliss recounts the fascinating story behind the discovery of insulin – a story as much filled with fiery confrontation and intense competition as medical dedication and scientific genius.

Originally published in 1982 and updated in 1996, The Discovery of Insulin has won the City of Toronto Book Award, the Jason Hannah Medal of the Royal Society of Canada, and the William H. Welch Medal of the American Association for the History of Medicine. 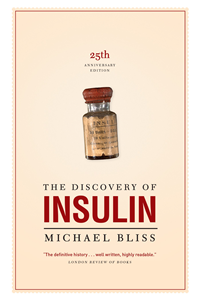 University of Toronto Press is representing this title on behalf of the author's widow.

"The Discovery of Insulin deserves a place on the bookshelf alongside such eye-openers as James Watson's The Double Helix."

"Scrupulously researched and compellingly readable ... I wholeheartedly recommend it to anyone with an interest in diabetes, medical history, or medical scandal and gossip."

Michael Bliss was University Professor Emeritus in the Department of History and the History of Medicine Program at the University of Toronto.

University of Toronto Press is Canada’s leading academic publisher and one of the largest university presses in North America, with particular strengths in the social sciences, humanities, and business. The Book Publishing Division is widely recognized in Canada for its strength in history, political science, sociology, Indigenous studies, and cultural studies. Internationally, UTP is a leading publisher of medieval, Renaissance, Italian, Iberian, Slavic, and urban studies, as well as studies in book and print culture. With the publication of influential authors and award-winning research, as well as a continuing dedication to groundbreaking new scholarship and innovative texts for the higher education market, UTP has firmly established its reputation for excellence. UTP's newest imprint is Aevo UTP, which brings its innovation and academic excellence to a general readership.

University of Toronto Press has chosen to review this offer before it proceeds.