The Devil You Know

A pressing need for income tempts Scott Lee to take on media tycoon, Rufus Lam’s case. It seems like a straightforward enough missing person’s search. Find out what happened to Rufus Lam’s friend and close business partner, Terence Auyeung. Take the money and move on. That’s the aim. A nice distraction too, from the growing malaise into which Hong Kong, the once vibrant city which has been Scott’s home for the past ten years, is slowly sinking. Sure, it’s 2017 and the city is about to elect its new Chief Executive. But not with the election system Hong Kong people want, Beijing has seen to that. The dream of democracy – true democracy – ended in 2014 when the initial exhilaration of the Umbrella Protests petered into nothing. But as Scott digs deeper in his search for Auyeung, he soon discovers that the Umbrella Generation never dissipated. It just went into hibernation, waiting for the right leader and the right time, to take up the cause once more. That leader is none other than Scott’s client, Rufus Lam. That time is now. And Scott’s caught right in the middle of it./The Devil You Know follows Peter Gregoire’s prize-winning first novel, Article 109, which reached Number One on the Dymocks list of best-sellers. 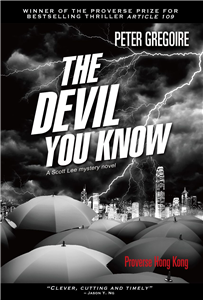 Proverse Hong Kong has chosen to review this offer before it proceeds.