A journey through psychosis

What leads a vibrant, ambitious young mother to swallow over forty prescription pills in the desperate hope she falls into a deep sleep and never wakes up? What could be so horrifying that she has come to the conclusion that this is the only way to end the relentless turmoil and unimaginable despair she has been suffering? Were it not for some kind of divine intervention - or just pure luck, she would have died and this book would never have been written. UK business woman Melanie Burnell was admitted to a secure psychiatric hospital for three months between April and July 2012, after she attempted suicide, following seven months of unbearable suffering from undiagnosed psychosis. Amazingly, the condition it is not widely known nor talked about despite being more common than diabetes. Now fully recovered Melanie strongly feels that if she had been diagnosed and treated sooner, she wouldn’t have hit crisis point, but unbelievably the early warning signs were simply never picked up by mental health professionals. Melanie’s memoirs leading up to her hospitalisation, document her thoughts and fears. Not knowing she was suffering from a treatable mental illness, she was convinced she was going mad. These memories, still powerful today, inspired her to write her book, documenting the frightening onset of the illness, the night of her massive overdose, her subsequent stay in hospital and her complete recovery and re-discovery of herself. Melanie's written this book because she feels so strongly, more people should be aware of this illness, how common it is and the devastation it can cause. This book is a hugely insightful view into her experience, written first hand and through the eyes of her family. Utterly terrifying at times, the book is laced with genuine humour and enlightenment; it’s a truly uplifting read especially for those experiencing or interested in mental health. 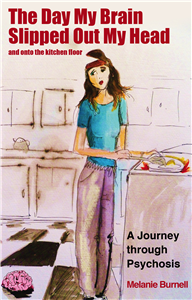 Live It Publishing has chosen to review this offer before it proceeds.