Failing to Reconstruct the South

This book is the first full account in more than 20 years of two significant, but relatively understudied, laws passed during the Civil War. The Confiscation Acts (1861-62) were designed to sanction slave holding states by authorizing the Federal Government to seize rebel properties (including land and other assets held in Northern and border states) and grant freedom to slaves who fought with or worked for the Confederate military. Abraham Lincoln objected to the Acts for fear they might push border states, particularly Missouri and Kentucky, into secession. The Acts were eventually rendered moot by the Emancipation Proclamation and the 13th Amendment. John Syrett examines the political contexts of the Acts, especially the debates in Congress, and demonstrates how the failure of the confiscation acts during the war presaged the political and structural shortcomings of Reconstruction after the war. 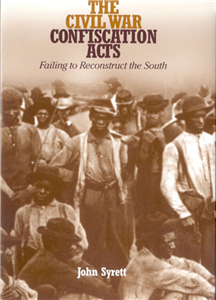