The Candy Guild (1). The Magic Pact

The most magical adventure since the discovery of chocolate! Do you believe in magic and miracles? Everyone in the little town of Belony takes magic and miracles for granted – everyone except Elina, who thinks it’s all a load of nonsense. That is, until her nervous neighbour Charlie happens to get hold of a bar of chocolate that has a very strange effect on her. Suddenly Elina is convinced that Charlie has fallen under a spell. Of all people, it’s shy Robin who comes to the girl’s rescue. He is a member of a Candy Guild family – people who have the ability to create magic sweets that will help others. This is how he knows that only the mysterious Candy Guild can lift the curse on Charlie. With a suitcase full of magic sweets, the three of them set out on a dangerous quest. Because not everyone keeps to the pact that magic sweets should only be used to do good… The Candy Guild. The Magic Pact is the first in a new series of magic-fantasy books for children of 9+ - as enchanting as chocolate and as wild as a Christmas cracker! 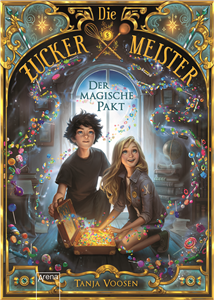