This new autobiography by Jonathan Scott reveals the extraordinary life of one of the word's most popular wildlife celebrities, who rose to international fame as presenter of Big Cat Diary, one of the BBC's most popular and long-running wildlife series.

Artist, safari guide, author and TV personality, Jonathan's observations of wildlife over the eyars prompt him to reflect on his own life, revealing a side to his character that he has struggled to overcome since childhoold. Aged nearly forty, he finally finds peace through meeting and marrying his wife, Anglea, but their world is changed forever the day that Angie is diagnosed wtih a cranial aneurism requiring urgent brain surgery. Facing up to that challenge draws them even closer together and leads them on a spiritual journey to rival anything they have underaken before. Ultimately The Big Cat Man is a love story: one man's infatuation with Africa and his unfailing devotion to the woman who shares his passion.

Jonathan's writing makes for a fascinating safari through a live lived in the world's most spectacular wilderness area. His book raises uncomfortable questions about the future of wildlife on a continent where the needs of the people sometimes seem overwhelming. It will bring hope to those who have struggled with their own demons and been afraid to seek help; but most of all it is an inspriation for those who long to follow their dream, whatever it may be.

Stunning an photographs and illustrations throughout 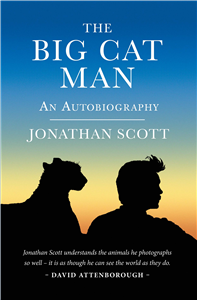 "Jonathan Scott understands the animals he photographs so well that it is as though he has entered their minds and can see the world as they do." David Attenborough

"Nobody knows lions like Jonathan Scott. He has been patiently observing them in Africa for many years and his Big Cat Diaries have given us all a wonderful chance to share his knowledge." Desmond Morris

"You can't make, buy or fake passion. It's pure and precious and probably the most valuable thing on earth. And when it comes to big cats, Africa and wildlife Jonathan has it in buckets. Along with knowledge and a great love." Chris Packham

"A cracking tale - and crackingly well told with deftness, compassion and humour. From the man whose name is synonymous with big cats, this is the brutally honest and insightful story of a life lived to the full." Mark Carwardine

"An engaging, thought-provoking read, presented by Bradt in truly sumptuous style, richly illustrated with Scott's own sketches and photographs." The Lady

"I have just turned the final page of this fascinating, intriguing and very personal story. I turned it with some regret as I had found Jonathan's account of his life - his fears, uncertainties, loyalties, discoveries and his passionate devotion to all things living, deeply moving. Few people know and continue to know, as profoundly as he does, the fearful challenges that face the natural world and its unique inhabitants. So when he raises the alarm and voices his deep fears for the future of those creatures and their vanishing homelands, we would be wise to listen to his words. They come from 40 or more years of living and breathing Africa." Virginia McKenna

JIn a career spanning 40 years, Jonathan Scott has become one of the most loved and recognised wildlife celebrities in the world presenting on shows such as the long-running series Wild Kingdom in the US and the enormously popular Big Cat Diary on the BBC in the UK and 15 other countries globally. A gifted writer, Jonathan is also a talented illustrator and award-winning photographer; he and his wife Angela are the only couple to have individually won the Overall Award in the prestigious Wildlife Photographer of the Year Competition. Originally from the UK, Jonathan now lives in Kenya, dividing his time between his house in a leafy suburb of Nairobi - with giraffes as neighbours - and his cottage on the famous Masai Mara National Reserve. The Mara is the location for many of the popular TV series that Jonathan has presented for the BBC, Animal Planet, Discovery Channel, Paramount TV and Turner Broadcasting including Big Cat Diary, Elephant Diaries, Big Bear Diary, Dawn to Dusk, Flamingo Watch and Africa Watch.

Bradt Travel Guides have a reputation as the pioneering publisher for tackling ‘unusual’ destinations, and producing colourful guidebooks which are entertaining as well as useful.

Bradt Travel Guides Ltd has chosen to review this offer before it proceeds.