The A Z of Being British

As its cover suggests, The A to Z of Being British is an acerbic take on the state of modern Britain. Funny, insightful and eversoslightly nonPC, the book is split into 70 alphabetic sections. It covers a range of topics from the generic (e.g. democracy) to the specific (e.g. Jeremy Clarkson) and from the perennial (e.g. Wimbledon) to the very topical (e.g. banks). I’m very fair in my criticism, being equally disgusted with everyone and everything that gets a mention. That hasn’t stopped some from taking offence, however, so be warned – this is not a book for the fainthearted or the deeply patriotic. There are many good, kind, hardworking people of integrity in Britain, but my book isn;t about them. Instead, I wrote it for them. Or to be more precise I wrote it for me, but with them in mind. Not all good, kind, hardworking people of Britain will welcome it. Some already haven’t. That came as no surprise, because not everyone takes a balanced view. Patriotism distorts, just as power corrupts. My book isn’t fair either. It’s a caricature, Britain seen grotesque in the cruellest of funfair mirrors, a counterbalance to all those people who lead our Government and our industries who aren’t kind people of integrity, and who are doing very nicely thank you out of screwing the nation while telling us that Britain is still Great. Well, it isn’t, and The A to Z of Being British explains in the clearest possible terms why. It's catharsis. Enjoy! 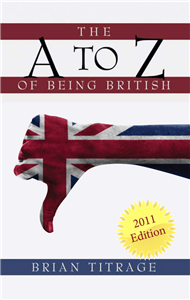