On the Militarization of Thinking

The title of this book echoes a phrase used by the Washington Post to describe the American attempt to kill Saddam Hussein at the start of the war against Iraq. Its theme is the notion of targeting (skopos) as the name of an intentional structure in which the subject tries to confirm its invulnerability by aiming to destroy a target. At the center of the first chapter is Odysseus's killing of the suitors; the second concerns Carl Schmitt's Roman Catholicism and Political Form; the third and fourth treat Freud's "Thoughts for the Times on War and Death" and "The Man Moses and Monotheistic Religion." Weber then traces the emergence of an alternative to targeting, first within military and strategic thinking itself ("Network Centered Warfare"), and then in Walter Benjamin's readings of "Capitalism as Religion" and "Two Poems of Friedrich Holderlin." 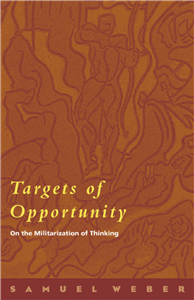