The Autobiography of Paul Parker

by Paul Parker with Pat Symes

Fulham, QPR and Manchester United legend Paul Parker played 19 times for his country, and is widely remembered for that Turin night in 1990 when England so nearly reached the World Cup final. Sir Bobby Robson, then the England manager, described Parker as having a "leap like a salmon and a tackle like a ferret". He won a host of medals with Manchester United as Sir Alex Ferguson built a dynasty on the defence of Bruce, Pallister, Irwin and Parker. Here, he reveals his battle against racism as a talented teenager from east London. Fulham sold him to avoid extinction, QPR hounded him out, and he refused to sign for Arsenal and Tottenham. Parker tells the harrowing tale of his failure to beat injury at United, and writes with perception and insight about his illustrious managers, team-mates and opponents: Ferguson, Gullit, Robson, Beckham, Keane, Cantona, Gascoigne and many more. 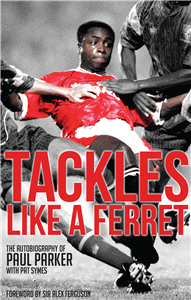 Pat Symes has worked for newspapers, radio and television for 35 years as a journalist and as director of a news agency based on the south coast. Previous collaborations include the ghosted autobiographies of West Indian cricketing greats Malcolm Marshall and Gordon Greenidge, among a variety of sports books.