Swindon Town On This Day

Swindon Town On This Day revisits all the most magical and memorable moments from the club’s rollercoaster past, mixing in a maelstrom of quirky anecdotes and legendary characters to produce an irresistibly dippable Robins diary – with an entry for every day of the year. From the club’s formation in 1879 through to the Premier League era, the red-and-white faithful have witnessed cup triumphs, hard-fought derby matches, European adventures, playoff success and heartbreak – all featured here. Timeless greats such as Harold Fleming, Don Rogers and Colin Calderwood, Andy Rowland, Duncan Shearer and John Trollope all loom larger than life. Revisit 31 May 1993, when Swindon beat Leicester 4-3 at Wembley to win Premier League status at last! 28 May 1970, when the Robins sparked a riot by winning the first-ever Anglo-Italian Cup! And 12 January 1963, when the lads beat the big freeze – and QPR 5-0 – all thanks to their basketball boots! 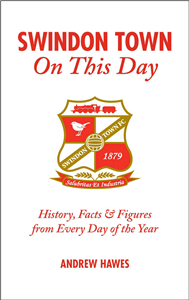 Andrew Hawes is the author of Swindon Town Miscellany – a football journalist, BBC Radio commentator and Swindon Town fan who acquired his love for the club through genetic inheritance. Andrew lives in Surrey but commutes regularly to the County Ground, as well as various points north, east, south and west when the fixture list demands.