Swindon Town Miscellany collects together all the vital information you never knew you needed to know about the Robins. In these pages you will find irresistible anecdotes and the most mindblowing stats and facts. Heard the one about the Swindon manager who conducted an interview in his pyjamas? How about the 1920s legend who starred in a silent-movie skills masterclass? Or the green-and-white ‘potato-print’ kit of 1992-93? Did you know local rivals Oxford United recorded just one League win at the County Ground in 24 attempts? That Town’s top marksman Harry Morris cost just £110 from Swansea in 1926, and scored 48 times in his first season? Or that Alex Ferguson was Swindon’s oldest debutant? All these stories and hundreds more appear in a brilliantly researched collection of trivia – essential for any United fan who holds the riches of the club’s history close to their heart. 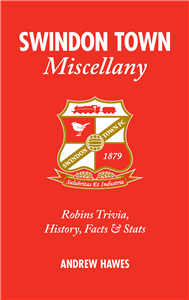 Andrew Hawes is a Swindon Town fan and football journalist in no specific order, who has acquired his love for the club through genetic inheritance. He lives in Surrey but commutes regularly to the County Ground, as well as various points north, east, south and west when the fixture list demands. Swindon Town Miscellany is Andrew’s first book.