Student's Guide to the Presidency

An indispensable reference for young researchers, specifically designed for the classroom.

Specifically written to engage high school students, Student’s Guide to the Presidency presents a comprehensive overview of the history and ongoing evolution of the American executive branch. This single-volume resource does not require any prior knowledge of the presidency and covers topics that meet national high school curriculum standards.  The third installment of the Student’s Guide to the U.S Government series is also appropriate for introductory American government college classes. Teachers and students alike will want to use this resource in preparation for exams and research papers.

Part One consists of three informative essays addressing compelling topics on the presidency:

Part Two is an alphabetical section of key words and concepts spanning Adams, John, to Wilson, Woodrow. The definitions are supplemented by sidebars with biographies of decision makers, spotlights on momentous events and key issues, legal milestones and scandals regarding the presidency, and point/counterpoint coverage of controversial issues. Recent entries include the 2008 election of Barack Obama.

Part Three complements the first two sections with a generous selection of influential primary source material, including inaugural addresses, constitutional amendments involving the election of the president and presidential succession, and political cartoons A crisp layout unites the text with illuminating photos, maps, charts, tables, timelines, and humorous political cartoons to provide a clear picture of the presidency. 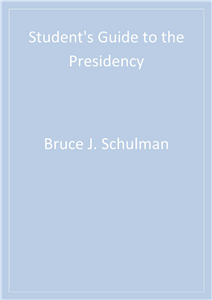