Kierkegaard's Pseudonyms and the Bible

This book studies the use of biblical quotations in Kierkegaard's pseudonymous works, as well as Kierkegaard's hermeneutical methods in general. Kierkegaard's mode of writing in these works - indeed, the very method of indirect communication - consists in a certain appropriation of the Bible. Kierkegaard thus becomes God's "plagiarist," repeating the Bible by reinscribing it into his own texts, where it becomes a part of his philosophical discourse and relates to most of his conceptual constructions. The Bible might also be called a gift, but a gift that does not belong to Kierkegaard, one he merely passes along to his reader. The invisible omnipresence of God's Word in the pseudonymous works, as opposed to the signed ones, forces us to revisit the entire distinction between the religious and the aesthetic. 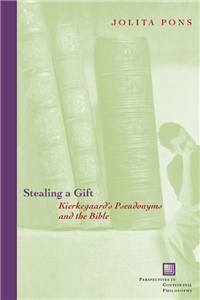