The Chakmas between Bangladesh and India

This comprehensive study explores issues pertaining to the 'stateless' status of the ethnic Buddhist Chakma refugees in the Indian state of Arunachal Pradesh, who originally belonged to the Chittagong Hill Tracts (CHTs). What sets it apart is its holistic overview of the social history of the Chakmas from the colonial period onwards. While analyzing and emphasizing the current plight of the Chakmas in India as stateless refugees, it raises the concomitant question of what it takes to qualify as citizens of a modern postcolonial state.

Setting a new dimension in refugee studies, the arguments in this book are developed on the framework of oral narratives, incorporating the self perceptions of the Chakmas as well as the people of the host nation. Stateless in South Asia: The Chakmas between Bangladesh and India examines national and international official documents and policy statements to critically analyze the absence of legal-institutional and legislative structures to address the concerns of refugees both at regional and national levels. While its core issue revolves around the socio-political status of the Chakmas, it also highlights pertinent issues regarding 'statelessness' in South Asia in general. Some of these are:

" The present academic and political conceptions of nationalism, citizenship and ethnicity.

This book will be a rich resource for scholars and students of politics, international relations, sociology, anthropology and history. It will also be immensely useful for policy makers and advocates working on issues pertaining to refugee studies, partition, development-induced displacement, indigenous peoples and human rights. 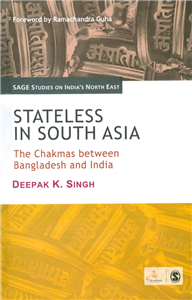