Sri Lankan Society in an Era of Globalization

Sri Lanka has suffered from decades of ethnic strife which has left in its wake a failure of governing arrangements, skewed distribution of economic benefits, and an exploitation of cultural traditions to divide people. Hence, argue the contributors to this volume, the time is now ripe for the people of Sri Lanka to consciously take up the task of building a new society.

At the same time, there is no readymade model that can be applied to Sri Lanka. Instead, this volume explores three elements which are crucial to the process of social reconstruction: a realistic analysis of novel problems, a search for guiding principles and a testing of procedures. In this framework, the essays in the first two parts of the volume discuss a wide variety of broad issues including the failure of Sri Lanka to create an inclusive nation-state, and the mutual exclusiveness of the two major communities exacerbated by their internal divisions.

The chapters in the subsequent sections present detailed case studies which illumine the potential for creating both a better society and a better life. 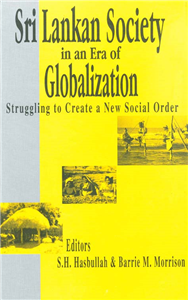