Shakespeare and the Prince of Love

The Feast of Misrule in the Middle Temple

Through his researches in the rich archive of 16th and 17th century manuscripts and documents at the Middle Temple in London, where he is a senior barrister, Anthony Arlidge has revealed that Shakespeare's Twelfth Night was commissioned for performance there in 1602. Middle Temple Hall is the only building surviving from Shakespeare's time where it is known that one of his plays had its first night.;He shows that, with its many legal references and 'inn-jokes', Twelfth Night was almost certainly written for an audience of lawyers. The Middle Temple was in fact full of talented young poets and playwrights at the time -- John Webster, John Ford and John Marston, author of What You Will, amongst others -- and it seems probable that Shakespeare knew some of them personally. Also, a 'cousin' of Shakespeare's was a student in the Inn in 1602. Like other Inns of Court, it had its own tradition of holding a feast of 'misrule' over the Christmas period, led by the Bright Prince of Burning Love. Twelfth Night has many oblique references to such festivities. That, for example, is the meaning in Italian of the name of the important character Feste. The still extant text of the Inn's 1597/8 festivities is included complete in an appendix.;In the course of the book, Anthony Arlidge describes in detail the background of the contemporary legal world, and brings to life the extravagant literary and social milieu of the Elizabethan Inns of Court in all its complexity. Shakespeare and the Prince of Love is written in such a way that it will have a strong appeal to the general reader as well as to Shakespeare enthusiasts, students of English literature and historians, for whom it will be an essential acquisition. 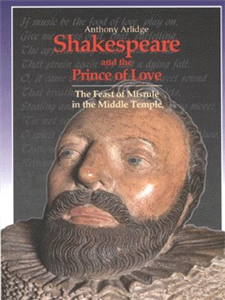