Muslims, France, and the Sexualization of National Culture

In contemporary France, particularly in the banlieues of Paris, the figure of the young, virile, hypermasculine Muslim looms large. So large, in fact, it often supersedes liberal secular society’s understanding of gender and sexuality altogether. Engaging the nexus of race, gender, nation, and sexuality, Sexagon studies the broad politicization of Franco-Arab identity in the context of French culture and its assumptions about appropriate modes of sexual and gender expression, both gay and straight. Surveying representations of young Muslim men and women in literature, film, popular journalism, television, and erotica as well as in psychoanalysis, ethnography, and gay and lesbian activist rhetoric, Mehammed Amadeus Mack reveals the myriad ways in which communities of immigrant origin are continually and consistently scapegoated as already and always outside the boundary of French citizenship regardless of where the individuals within these communities were born. At the same time, through deft readings of—among other things—fashion photography and online hook-up sites, Mack shows how Franco-Arab youth culture is commodified and fetishized to the point of sexual fantasy. Official French culture, as Mack suggests, has judged the integration of Muslim immigrants from North and West Africa—as well as their French descendants—according to their presumed attitudes about gender and sexuality. More precisely, Mack argues, the frustrations consistently expressed by the French establishment in the face of the alleged Muslim refusal to assimilate is not only symptomatic of anxieties regarding changes to a “familiar” France but also indicative of an unacknowledged preoccupation with what Mack identifies as the “virility cultures” of Franco-Arabs, rendering Muslim youth as both sexualized objects and unruly subjects. The perceived volatility of this banlieue virility serves to animate French characterizations of the “difficult” black, Arab, and Muslim boy—and girl—across a variety of sensational newscasts and entertainment media, which are crucially inflamed by the clandestine nature of the banlieues themselves and non-European expressions of virility. Mirroring the secret and underground qualities of “illegal” immigration, Mack shows, Franco-Arab youth increasingly choose to withdraw from official scrutiny of the French Republic and to thwart its desires for universalism and transparency. For their impenetrability, these sealed-off domains of banlieue virility are deemed all the more threatening to the surveillance of mainstream French society and the state apparatus. 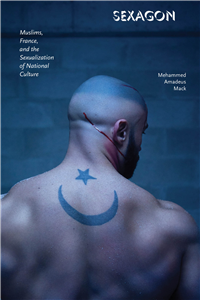 "In France today, sex is a matter of national identity: it provides a language to speak about those whose Frenchness is deemed problematic. Indeed, the gender and sexuality of these racialized 'Others'are the object of a proliferation of discourses. Mehammed Mack’s original, rich, and precise contribution to a growing field of studies focuses on the multiplicity of cultural representations that both reflect and produce postcolonial France as a kaleidoscope of sexual obsessions – a 'sexagon.'"--Eric Fassin, Paris-8 University Vincennes—Saint-Denis

Mehammed Amadeus Mack is Assistant Professor of French Studies and the Study of Women and Gender at Smith College.