Autumn 1933, and for once struggling writer James Ross seems to have fallen on his feet. Not only has the Labour Exchange fixed him up with a day-job collecting rents in Soho, but friendly Mr Samuelson is employing him front-of-house in the Toreador night-club. Even his melancholy love-life is looking up, thanks to a chance encounter with the alluring Gladys, enigmatic inhabitant of the Meard Street second-floor back.On the other hand, Soho looks an increasingly dangerous place in which to be at large. Not only are Mosley's Blackshirts on the prowl, but somebody is raiding the dirty bookshops and smashing night-club windows in a quest for moral decency. Fetched up in a police-cell in West End Central after an unfortunate incident outside the Toreador, and coerced into undercover work by the mysterious Inspector Haversham, James finds himself infiltrating the Blackshirts' Chelsea HQ , leafleting passers-by in the King's Road and spying on a top-secret dinner party attended by a highly important Royal guest. Meanwhile, the emotional consequences of this deception are set to come as a nasty shock.Praise for At the Chime of a City Clock:'Steeped in historical detail, the novel evokes the sleazy side of the Thirties so vividly that you can almost feel the grease and grime on your fingers.' Anthony Gardner, Mail on Sunday'Engaging, cheerful, opportunist James Ross. You won't forget him or the London he frequents for a long time after closing the book.' Susan Hill, Literary Review'A watchable, atmospheric black-and-white film in novel form' Sunday Express'Written with a splendid and captivating assurance' The Scotsman'Finely drawn ... Artful ... Masterly.' John Sutherland 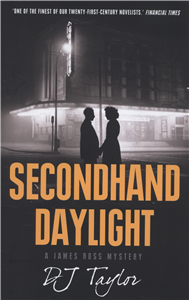