A study in Aggression

The author views the millions of stray dogs that live in India's streets as symbols of the weak and vulnerable. He interrogates the nature of human aggression and cruelty as reflected in people's behaviour towards stray animals using the mass killing of stray dogs in Bangalore, India's IT capital, as a case study. Such cruelty indicates a profound alienation of the perpetrators from their own quintessential self and India's Vedic and Upanishadic religious and cultural heritage. Their mindset is a product of the West's humanist culture whose essence has been most remarkably encapsulated in Protagorus's famous aphorism, 'Man is the measure of all things', and which, in its distorted version, has led to the whole of Nature, animate and inanimate, being treated as colony of human beings, the same way Western countries treated the countries of Asia and Africa they brought under their sway. 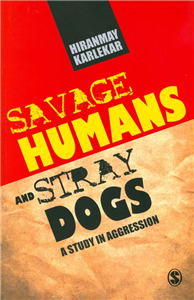