Sakhalin Island is at once a periphrasis of, and reference to, Chekhov, whom Eduard Verkin reveres, as well as an excellent post-apocalyptic story, an adventure novel (a real page-turner), a tender love story and a sad narrative of lost hope. The book will leave no one indifferent: neither the fans of classical literature, nor the readers of Stanislav Lem or the Strugatsky brothers. It has adventures, action, unpredictable plot twists, complex futuristic constructs and philosophical musings, and, naturally, a story of real love, as sad as anything you’ll read.

Lilac, a futurologist, travels to the island of prisoners. She plans to visit the prisons talk to the convicts and guards, and get immersed in the atmosphere of the place where there is no hope for a better future. The girl wants to take a look in every corner of life on the island, and provide a scientific forecast for the future. But an earthquake makes her task more complicated.

In addition to describing the island, the author gradually uncovers the recent history of the world: not much is left after a nuclear war, and the leading superpower is now Japan. After remaining neutral throughout the war, the country sees other superpowers destroy one other, and comes out of the war as the winner.

The book, written in the social post-apocalypse genre, is filled with all the small delights of the road genre: detailed descriptions of places, stops, accidental characters we meet on the way, sudden plot twists. There are plenty of post-apocalyptic elements in the story, too — with danger zones, an absence of birds or animals, poisonous water, inedible fish, the use of bodies as fuel at power plants, strangely constructed prison buildings, mysterious sects, and a deadly virus. 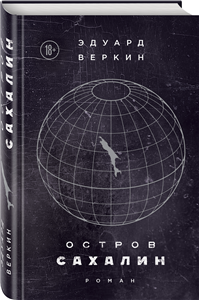 Eduard Verkin was born in Vorkuta, Russia’s far North, in 1975, in the family of a miner and a pharmacist. He studied history and law at the State University of Syktyvkar (the capital of Komi Republic). After graduating Verkin taught social studies at a middle school. In 2003 Verkin signed up for creative writing courses at the Gorky Literature Institute in Moscow. Since 2004 Eduard Verkin has published several series of sci-ﬁ and fantasy ﬁction for children. Eduard Verkin’s children’s books have become bestsellers and won numerous awards. Sakhalin Island is Eduard Verkin’s ﬁrst ﬁction for adults.