The Tale of the Sensational Alex Harvey Band

When Alex Harvey died in 1982 he left behind a legacy and a passion which survives to this day - truly cult status. The Sensational Alex Harvey Band (SAHB) were the biggest-grossing mid-70s live act in the UK; they released eight critically-acclaimed albums in their five years together; and they inspired many of the top names in pop entertainment over the last 30 years, from Robert Smith to Nick Cave; from Billy Connolly to Richard O'Brien. In 1972 a former teenage idol, Alex Harvey, joined Scotland's loudest rock group to form The Sensational Alex Harvey Band. As early pioneers of punk and glitter, they caused a sensation at live gigs and became one of the strongest artistic forces in popular music at the time. SAHB Story (based on the title of the band's fifth album) is the definitive biography of Scotland's most influential artists. It follows Alex's first outing as a 50s pop star then a 60s soul star, and at the end of the decade picks up the rest of the band as legendary too-loud prog-rockers Tear Gas. The mainstay of the book is a blow-by-blow account of the SAHB years 1972-77, illustrated with personal anecdotes and never-before-seen photographs.;The career of each artist is followed into the 80s, after Alex died on tour at the age of 47. SAHB Story completes the band's history with the finale comeback of 2002-2004. This is the first authorised biography of the band written by journalist Martin Kielty with the approval and cooperation of Zal Cleminson, Chris Glen, and Hugh and Ted McKenna. 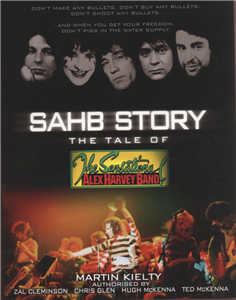