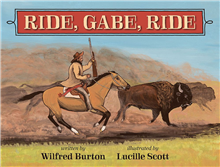 • Ages 5–13
• Vibrantly illustrated original artwork
• Based on a documented historical event
• Connections to Canadian curriculum for grades K-8
• Rhyming verses
• English text with Michif words and glossary
• Written by the award-winning author of Fiddle
Dancer, Dancing in My Bones, and Call of the Fiddle.

Review by Shelley A. Leedahl

Got to love it when a writer takes a compelling historical event and transforms it into an illustrated children’s book that will both educate and entertain young readers. That’s exactly what award-winning Saskatchewan Métis author and storyteller Wilfred Burton has done– along with illustrator, Lucille Scott – in Ride, Gabe, Ride, a new softcover published by Your Nickel’s Worth Publishing that tells the story of legendary Métis leader Gabriel Dumont and a particularly amazing buffalo hunt.

The tale begins with a brief biography, explaining that Dumont “fought for Métis rights in two resistances,” and “could negotiate in seven languages, was a superb buffalo hunter, and even performed with Buffalo Bill’s Show.”

The anecdote that inspired this book is based on “an incredible hunting story” Dumont relayed to Archie Brown, who wrote about it in his 1927 memoir.

There’s much to recommend in this rhyming adaptation. Firstly, there’s adventure: Dumont and “the people of Bois de Fleche” prepare for the dangerous hunt – a blessing from “the black-robed priest” is included – and with horses and Red River carts, they follow Dumont across the prairie landscape and set up camp. When a herd’s spotted near the river, Dumont “thunder[s] toward the stampeding horde of countless buffalo, heart as fast as hoofbeats, into the fleeing flow”. But things don’t go as expected when Dumont dismounts and straddles the buffalo with his knife: “up sprang the bull with Gabe astride and raced off across the land!”.

Eventually, the racing buffalo collapses, and “Gabe jump[s] off the heap of muscle, unsteady but in one piece”. Writer and illustrator have not shied away from portraying even the skinning of the fallen animal: “They carved him up to share with all, their next meal set aside. They dried the meat, then pounded it, and mixed it with chokecherries: pemmican for them to eat and to sell across the prairies.” The story demonstrates that though the Métis worked hard to survive – I noted via the illustrations that the women were very much a part of the operation, too – they also enjoyed many good times after they “marched back to their winter base, where they sang and danced and settled down to a gentler, slower pace.”

I commend the designer in using bold but not distracting colours behind the pages that include text, and colourful, full-bleed illustrations on the opposing pages. We see Hudson’s Bay blanket-inspired jackets, moccasins, flour sacks, and red-striped Métis sashes. There’s a crow on nearly every page (fun for kids to spot them).

On four of the twenty-eight pages a stanza of text is italicized, and these lines could be put to a simple melody and sung for extra enjoyment. The book concludes with a glossary where we learn more about Métis culture, and the Michif words for “wife/woman” (lii faam), “old person” or Elder (li vyeu), and children (lii zaanfaan).

If you’re looking for a children’s book that celebrates Métis heritage and the Métis hero, Gabriel Dumont, you’ve found it.

Wilfred Burton, a proud Michif, grew up in the Midnight Lake area of Saskatchewan. He has been an elementary teacher, university instructor, and
literacy coordinator. In retirement, he keeps busy
working for various educational publishers and volunteering. Wilfred is the author of several
Métis-specific children’s picture books, including the Fiddle Dancer series, which he co-authored with Anne Patton. His identity and love of Métis
storytelling, fiddle music, and dance was a gift from his mother. Wilfred can often be found beading, working in the garden, or practising the fiddle.

Lucille Scott is a self-taught artist with a passion for painting. Her speciality is painting on feathers, but she was thrilled to create the illustrations for Ride, Gabe, Ride. Born and raised in north-central Saskatchewan, Lucille grew up with the Métis culture
and traditions that guide her through life. She now lives in the village of Canwood, Saskatchewan.

SaskBooks is the creative industry association representing book publishers in Saskatchewan. With our 40 members publishing in all genres, you're certain to find something appropriate for your publishing profile.

SaskBooks has chosen to review this offer before it proceeds.