For most of US history, most of America’s Latino population has lived in nine states—California, Arizona, New Mexico, Colorado, Texas, Illinois, Florida, New Jersey, and New York. It follows that most education research that considered the experiences of Latino families with US schools came from these same states. But in the last 30 years Latinos have been resettling across the US, attending schools, and creating new patterns of inter-ethnic interaction in educational settings. Much of this interaction with this New Latino Diaspora has been initially tentative and improvisational, but too often it has left intact the patterns of lower educational success that have prevailed in the traditional Latino diaspora._x000D_ _x000D_ Revisiting Education in the New Latino Diaspora is an extensive update, with all new material, of the groundbreaking volume Education in the New Latino Diaspora (Ablex Publishing) that these same editors produced in 2002. This volume consciously includes a number of junior scholars (e.g., C. Allen Lynn, Soria Colomer, Amanda Morales, Rebecca Lowenhaupt, Adam Sawyer) and more established ones (Frances Contreras, Jason Irizarry, Socorro Herrera, Linda Harklau) as it considers empirical cases from Washington State to Georgia, from the Mid-Atlantic to the Great Plains, where rural, suburban, and urban communities start their second or third decades of responding to a previously unprecedented growth in newcomer Latino populations. With excuses of surprise and improvisational strategies less persuasive as Latino newcomer populations become less new, this volume considers the persistence, the anomie, and pragmatism of Latino newcomers on the one hand, with the variously enlightened, paternalistic, dismissive, and xenophobic responses of educators and education systems on the other. With foci as personal as accounts of growing up as an adoptee in a mixed race family and the testimonio of a ‘successful’ undocumented college graduate to the macro scale of examining state-level education policies and with an age range from early childhood education to the university level, this volume insists that the worlds of education research and migration studies can both gain from considering the educational responses in the last two decades to the ‘newish’ Latino presence in the 41 U.S. states that have not long been the home to large, wellestablished Latino populations, but that now enroll 2.5 million Latino students in K-12 alone._x000D_ _x000D_ "Timely and compelling, Revisiting Education in the NLD offers new insight into the Latino Diaspora in the US just as the discussions regarding immigration policy, bilingual education, and immigrant rights are gaining steam. Drawing from a variety of perspectives, contributing authors interrogate the very concept of the diaspora. The wide range of research in this volume thoughtfully illustrates the nuanced phenomena and provides rich descriptions of complex situations. No longer a simple question of immigration, the book considers language and legal status in schools, international adoption, teacher preparation, and the relationships between established and relatively new Latino communities in a variety of contexts. Comprised of rich, thoughtful research Revisiting Education provides a fascinating window into the context of Latino reception nationwide. ~ Rebecca M. Callahan, Associate Professor - University of Texas-Austin_x000D_ _x000D_ As the leader of a 10-years-and-counting research study in Mexico that has identified and interviewed transnationally mobile students with prior experience in U.S. schools, I can affirm that in addition to students with backgrounds in California, Arizona, Texas, and Colorado, migration links now join schools in Georgia, Minnesota, Oklahoma, Alabama, etc. to schools in Mexico. For that reason and many others I am excited to see this far-ranging, interdisciplinary, new text that considers policy implementation through lenses as different as teacher preparation, Latino adoption into culturally mixed families, the fate of Latino newcomers in 'low density' districts where there are few like them, and the misuse of Spanish teachers as interpreters. This is an relevant book for American educators and scholars, but also for readers beyond U.S. borders. Hamann, Wortham, Murillo, and their contributors should be celebrated for this fine new collection. ~ Dr. Víctor Zúñiga, Dean of Research and Extension, Universidad de Monterrey 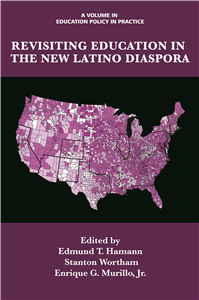