Marion, Derrida, and the Limits of Phenomenology

Rethinking God as Gift is situated at the intersection of philosophy, critical theory and theology. The first sustained study of the work of Jean-Luc Marion in English, it offers a unique perspective on contemporary questions and their theological relevance. Taking its point of departure from the problem of the gift as articulated by Jacques Derrida, who argues that the conditions of possibility of the gift are also its conditions of impossibility, Horner pursues a series of questions concerning the nature of thought, the viability of phenomenology, and, most urgently, the possibility of grace. For Marion, phenomenology, as the thought of the given, offers a path for philosophy to proceed without being implicated in metaphysics. His retrieval of several important insights of Edmund Husserl, along with his reading of Martin Heidegger and Emmanuel Levinas, enables him to work out a phenomenology where even "impossible" phenomena such as revelation and the gift might be examined. In this important confrontation between Marion and Derrida issues vital to the negotiation of postmodern concerns in philosophy and theology emerge with vigour.;The careful elucidation of those issues in an interdisciplinary context, and the snapshot it provides of the state of contemporary debate, make Rethinking God as Gift an important contribution to theological and philosophical discussion. 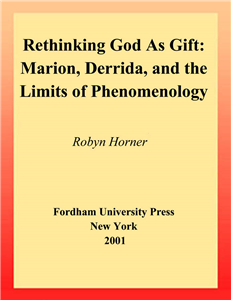