In 402 AD, after invading tribes broke through the Alpine frontiers of Italy and threatened the imperial government in Milan, the young Emperor Honorius made the momentous decision to move his capital to a small, easy defendable city in the Po estuary - Ravenna. From then until 751 AD, Ravenna was first the capital of the Western Roman Empire, then that of the immense kingdom of Theoderic the Goth and finally the centre of Byzantine power in Italy.

In this engrossing account Judith Herrin explains how scholars, lawyers, doctors, craftsmen, cosmologists and religious luminaries were drawn to Ravenna where they created a cultural and political capital that dominated northern Italy and the Adriatic. As she traces the lives of Ravenna's rulers, chroniclers and inhabitants, Herrin shows how the city became the meeting place of Greek, Latin, Christian and barbarian cultures and the pivot between East and West. The book offers a fresh account of the waning of Rome, the Gothic and Lombard invasions, the rise of Islam and the devastating divisions within Christianity. It argues that the fifth to eighth centuries should not be perceived as a time of decline from antiquity but rather, thanks to Byzantium, as one of great creativity - the period of 'Early Christendom'. These were the formative centuries of Europe.

While Ravenna's palaces have crumbled, its churches have survived. In them, Catholic Romans and Arian Goths competed to produce an unrivalled concentration of spectacular mosaics, many of which still astonish visitors today. Beautifully illustrated with specially commissioned photographs, and drawing on the latest archaeological and documentary discoveries, Ravenna: Capital of Empire, Crucible of Europe brings the early Middle Ages to life through the history of this dazzling city. 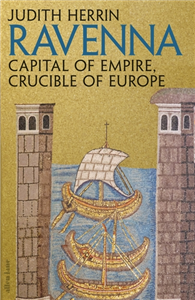 'Magisterial - an outstanding book that shines a bright light on one of the most important, interesting and under-studied cities in European history. A masterpiece.' Peter Frankopan

'A wonderful new history of the Mediterranean from the fifth to eighth centuries through a lens focussed on Ravenna, gracefully and clearly written, which reconceptualizes what was "East" and what was "West".' Caroline Goodson

'A masterwork by one of our greatest historians of Byzantium and early Christianity. Judith Herrin tells a story that is at once gripping and authoritative and full of wonderful detail about every element in the life of Ravenna. Impossible to put down.' David Freedberg

Judith Herrin won the Heineken Prize for History (the 'Dutch Nobel Prize') in 2016 for her pioneering work on the early Medieval Mediterranean world, especially the role of Byzantium, the influence of Islam and the significance of women. She is the author of Byzantium: The Surprising Life of a Medieval Empire, The Formation of Christendom, A Medieval Miscellany and Women in Purple. Herrin worked in Birmingham, Paris, Munich, Istanbul and Princeton before becoming Professor of Late Antique and Byzantine Studies at King's College London until 2008, where she is now the Constantine Leventis Visiting Senior Research Fellow in the Department of Classics. She has excavated in Greece, Cyprus and Turkey, and served for thirty years on the editorial board of Past and Present.

At Penguin Random House UK, we champion the world's most brilliant voices, bringing them to life in compelling and dynamic ways for audiences everywhere. Our books shape the broader cultural life of our society and accompany people of all ages on their journey of discovery of the greatest stories, the smartest thinking and the best ideas.   Penguin Random House UK Group Rights represents Foreign and Domestic Rights across the company’s seven divisions. One team represents Ebury, Cornerstone, Penguin General and Penguin Press, another represents Transworld, Michael Joseph and Vintage, and the third represents illustrated titles across the seven divisions.   For more information and our catalogue, please visit our webpage.

Penguin Random House UK has chosen to review this offer before it proceeds.